The Bulova Watch Co. and the Bulova Rite Angle

A Brief History of the Bulova Watch Co. 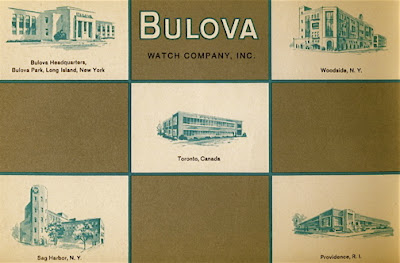 Bulova Watch Co. began its history with its founder Joseph Bulova, a Czech who immigrated to the U.S. in the 1875. From a humble beginning as a retailer to founding the watch manufacturing company with his son in 1923, Bulova Watch Co. has an interesting history that is still alive today with the parent company Citizen Holdings Co., Ltd., a Japanese company producing watches and other products.

While Bulova Watch Co. has its roots in the U.S., the watches, for all intent and purposes, have always been manufactured in Switzerland with some R&D, assembly and testing done in the U.S. over the years. In 1927 Bulova moved to a New York skyscraper and created the Bulova Observatory on its top for taking sidereal time (this is the relation to earth's orbit around the sun which is not always the same as clock time). Today, Bulova maintains its U.S. headquarters in New York in the Empire State Building.

Bulova has had some interesting highlights over the years with it's watches. The "Lone Eagle" wristwatch of the 1920s and its connection Charles Lindbergh, the "Academy Award" line, the "Accutron Spaceview" and one of my favourites, the "Rite Angle".  Each of the different models had several versions over their production years with the Academy Award line having several dozen versions.

The Lone Eagle and Academy Award lines come with some interesting stories and associated controversies. I'll leave it up to to you research these stories.

My 1938 Bulova Rite Angle features a stepped side engraved case with a raised gold numeral dial. There were several case variants and several dial options over several years. Like many watches, with several different versions and years of production, you could collect several Rite Angles.


Posted by Inatime Watches at July 28, 2016 No comments:
Email ThisBlogThis!Share to TwitterShare to FacebookShare to Pinterest

From Hamilton to Bulova

Stay tuned for my next blog on the Bulova Watch Company and the 1938 Bulova Rite-Angle wristwatch.

Posted by Inatime Watches at July 11, 2016 No comments:
Email ThisBlogThis!Share to TwitterShare to FacebookShare to Pinterest

The Hamilton Watch Co. and the "Putnam" Wristwatch

My first post introduced you to my new blog by referring to my 1933 Hamilton Putnam but I didn't get into detail on that particular watch or the company that made it. This post is about the Hamilton Watch Company and the 1933 Hamilton wristwatch known as the Putnam.

The Hamilton Watch Co. was founded in 1892 in Lancaster, Pennsylvania. A watch manufacturer with it's origins making pocket watches known as the "watch of railway accuracy". Strap watches, or wristwatches, were introduced by Hamilton sometime around the first world war and many of them were worn by U.S. and allied troops. This would be repeated during the second world war where production for a number of years were dedicated to producing watches for service personnel.

Hamilton did everything in their plant in Pensilvania. From manufacturing the tiny screws to the oils that lubricated the intricate wheels. If went into a Hamilton watch, they made it. Manufacturing in the U.S continued for Hamilton up until to the late 1960s when Hamilton moved their production to Switzerland, following the trend in watchmaking at the time.

Vintage pocket and wristwatches were "mechanical" in that a spring was the power source that needed to be wound from time to time. Hamilton incidently introduced the first electric watch in the 1950s, an electric hybrid, using the principles of a mechancial watch powered by a battery instead of a spring. Modern watches are typically electronic, using a quartz crystal that is electrically charged by a battery.

The Putnam shows up in the 1932 Hamilton and Illinois catalog price list and was produced through 1935. We get a peak of the Putnam in the subsequent 1933 Hamilton catalog.


The 1933 catalog showed that it came in both yellow and white 14k gold fill and a choice of a couple of dials - raised gold numerals or a luminous dial. My version below is yellow gold filled with raised gold numerals. During this watch obsession of mine I've noticed many collectors collect a certain model and all it's variations. When you think about it, watches came in white, yellow and green gold fill along with solid gold then you add three, four or more dial options, the permutations are overwhelming. 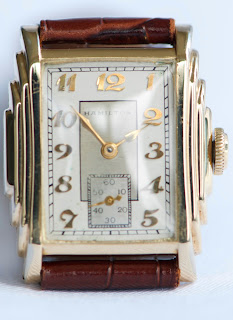 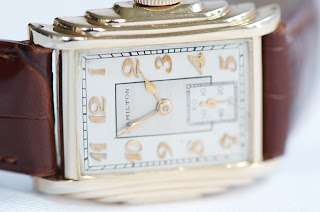 My particular 1933 version has a refinished dial (the face of the watch). Some purists might keep the original dial but this is how mine came to me and the original dial likely detracted from the overall watch and was redone.

There are a number of ways to confirm a watches date, some of which I've mentioned.

Varying production dates at the manufacturer sometimes meant the case and movement are of different years. Some watch cases have a roman numeral engraved in them that can often match the movement serial number letting you know that the case and movement left the manufacturer at the same time. Catalogs mention the movement associated with the model so you can at least know they match. One caveat, watchmakers like Hamilton often "tweaked" their movements from year to year and simply added a letter after the movement number so you need to be aware when buying vintage watches. Confused yet? If you're a purist, it matters.

Other times, as a mechanical watch was often a lifelong timepiece, when it got serviced at the local watchmaker every 3 to 5 years the movement may have needed to be replaced just like the strap.

Names of watch models in the Hamilton line over the years were derived in many ways, including the use of shapes (how exciting), great resorts and in the case of this Putnam, explorer names like David Binney Putnam.

To me the Putnam represents the quintessential "art deco" styling with its stepped case. I have a number of Hamilton watches from the 1930s and they represent to me the pride of my collection.

This is where it begins - It's About Time


Welcome to my new blog. Where do I begin?

I seem to have created an obsession for pre 1960 wristwatches and in turn I feel the need to talk about them, show them off, and perhaps pass on a great retro watch to you (you'll have to wait for my website to get up and running for that).

I hope to chat about all things retro watches and about my personal watch collection, give you some details about the specific watch manufacturers and watch models and present it as it would have been originally presented when first sold. I'll provide references to original manufacturer catalog references (including pictures), vintage watch ads (more pictures) and the original presentation box (even more pictures).

While writing this first post I came up with the answer to the question I posed above "Where do I begin?" I will begin with what started it for me - a gift from my dear wife, a 1933 Hamilton "Putnam" and a chance encounter with a watchmaker in Victoria, British Columbia. I had been scouring the internet and checkng out antique stores for vintage watches (having only looked) and my wife obviously noticed this early interest. I was greatly surprised four years ago on my birthday when I was presented with a Hamilton Watch Co. 1933 "Putnam" mechanical wristwatch.


Not long after receiving the incredible birthday gift, my wife and I were strolling down "antique row" in Victoria, British Columbia and we came across a gentleman's watch repair store; we had walked by it previously and peaked through the windows but had never entered. That particular day though we decided to enter. The proprietor had several dozen vintage watches that we looked at including another Hamilton, another c. 1933, a "Webster"; which of course I bought that day. While browsing the store that day the watchmaker couldn't help noticing my enthusiasm and asked if I'd like to join him on Saturdays at his shop. You have to remember, this was the first time I met the man and he was inviting me to spend my Saturdays with him in his shop! I of course said yes. Well, let me tell you, that was really what hooked me on vintage watches. Beginning that summer I joined him every Saturday and he patiently taught me, provided me with my first watch makers tools, I received some great watches and he even fed me while I was there. We became great friends Canh and I. BTW, he's retired now and our friendship continues. 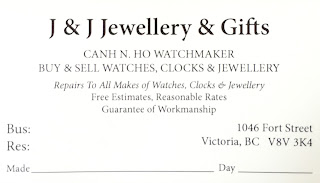 So this has been the inspiration for my vintage watch obsession.

I'm no historian, simply a hobbyist so history lessons are better left to experts. I will undoubtedly not get it quit right on occasion when I write about a watch, but what the heck. I welcome feedback from those with better intel so that I may continue my life long learning and update my blog.

Before television and the internet, manufacturers of every type of consumer goo advertised in lots of different print media. Saturday Evening Post, National Geographic, Ladies Home Journal, Harper's Bazaar, Life and the like. Add the advertisements made by retailers in newspapers and you have a significant archive of watch history.  Original dealer catalogs are being archived like the ones for Hamilton here on this website Vintage Watch Forum - dealer catalog pages. When I scour period publications it ensures that my watches are presented in their period appropriate presentation box and watch strap type.

For me, the graphics in vintage publications are pretty cool too- kinda makes me think of the T.V. show Mad Men, the show about some pretty crazy people revolving around an advertising agency called Coopers, Sterling et al. BTW, there were a few cool watches featured in that show (OMG, I am obsessed).

While you can find lots of the vintage adverts on line, I enjoy scouring though second hand and vintage stores and their vintage magazine section. My watch obsession includes a bunch of retro ads waiting to be framed and hung in my work shop. I've found a great resource at an antique store on Vancouver Island where the vendor scours the magazines himself and cuts out the retro adverts for all kinds of stuff (sorry purists, scissors are involved) and then sells the magazine page that has the ad on it.

The box below houses my Putnam and several other boxes hold other my Hamilton wristwatches (check out my watch collection pages). I also have presentation boxes for my Gruen and Bulova wristwatches.

These particular boxes were used from the mid to late 1930s through 1940s and it appears the only substantial change between those two decades was the use of Hamilton's crest during the 30s and changing to simply the name "Hamilton" in the 40s. As my Putnam is an early 1930s model it was likely presented by the jewller in an early presentation box like the one below. These are harder to find as the material that covered them tended to disintegrate over time (not like plastic bakelite). The box my Putnam is in now is still from the same decade so until I find the period "correct", it will do just fine.