How Obsessed Am I?

I was recently at a world-class resort (you can check out some Instagram pics about it) where I had a wee bit of an accident.

Having spent a good part of the day at the remote hospital clinic getting tested and checked over to make sure nothing 'serious' was wrong (BTW, I'm mostly fine), my injury was such that I would be unable to drive myself home. So, my wife flew up in a float plane to the resort to pick me up so she could drive me back home.

We live on an island which requires us to take a ferry, adding to an interesting trip down from the mountainside, through the major traffic of Vancouver to get to the ferry terminal to get home.  Of course the ferry doesn't run 24 hours per day and we left the resort in the very late afternoon having spent several hours at the clinic.

I am prepping for my second vintage show/sale and wanted to pick up another display case for the show. I had originally thought that on my return trip home I'd stop by a certain Swedish furnishings store and pick it up and carry on to the ferry. Well, with my wee accident my return plans changed. As it turns out, with my wife behind the wheel driving down from the mountain, she suggested we drive to the store and she could pop in while I waited in the car, pick up the display and still make the ferry we were scheduled on (which was the last of the day). 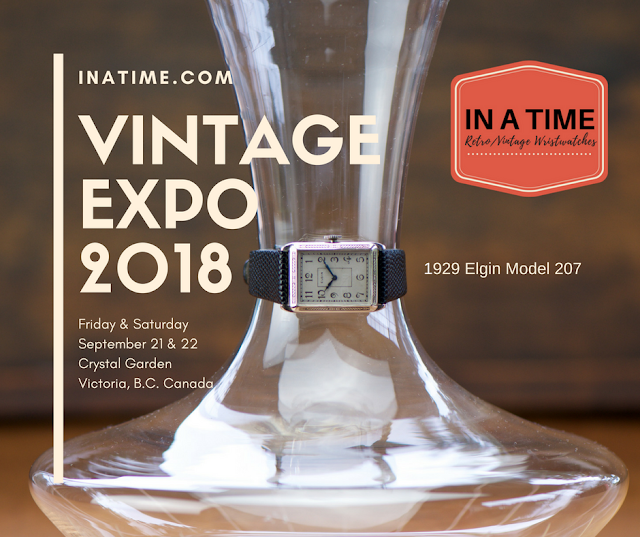 Arrival at store 19:56, ferry departure 21:00. As I sat in the car I checked the ferry website for how full it was - 70%, then 75%, then 82%; yikes, would it be full by the time we got there? We left the store at 20:13 and thankfully Google Maps said it would take 20 minutes to get to the ferry. As my wife drove from the store to the terminal we passed under a big billboard a few kilometers from the terminal that displays how full the ferry is - 90%. Arrival at ferry terminal 20:34 (wow Google, that's impressive) and 96% full. We made it!

My point? Despite my condition, a drive down a mountain highway, navigating through cross traffic in a major city, I still got my display case and we made the ferry. That is likely a bit of an obsession. And now, a bit of recovery.

P.S.
How come the Swedish store gives you extra parts? And please, if you are in the area this weekend, check out Vintage Expo 2018 and stop by In a Time's booth.
Posted by Inatime Watches at September 19, 2018
Email ThisBlogThis!Share to TwitterShare to FacebookShare to Pinterest