I blogged about adding a new mechanical watch maker in my blog "Welcome to the Family" and blogged about being distracted by pocket watches in "Squirrel". Well, I've done it again as I've been distracted with Bulova's electronic watch the "Accutron".

An electronic watch? A new technology introduced by Bulova around 1960 that utilized a 360-herz tuning fork, powered by a one-transistor electronic oscillator, to drive the timekeeping functions rather than a traditional balance wheel. This watch doesn't tick, it hums! 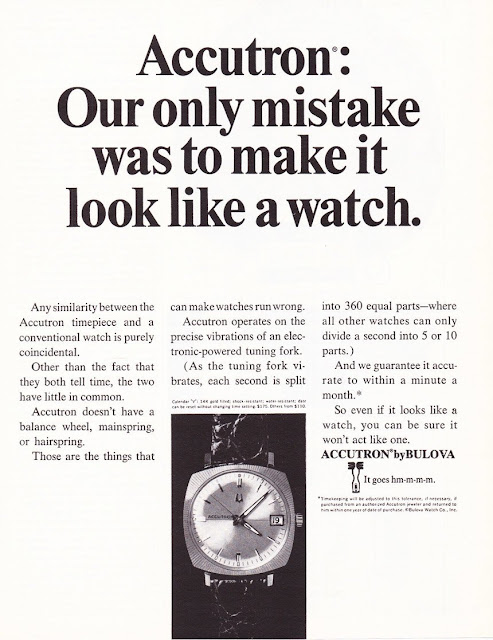 This is the watch that went to the moon and even appeared on the television show Mad Men (season 7, episode 1). They even marketed this as "not" being a watch. This was a revolutionary watch that even predated quartz movements.

So, back to why this is a diversion, well, I purchased my first Accutron and loved the look, the movement, how the second hand advances so I bought another and another. Not quite a collection, but a diversion from my focus of mechanical watches.


You can see in the picture of my two Accutrons above that the tuning fork symbol appears on both dials and the seconds hand on the watch to the right. This symbol became a major part of Bulova's marketing. Interestingly, the tuning fork appears on some 60s mechanical watches and it survives today with Bulova's modern watches. Perhaps its use today is an ode to the 1960s and Bulova's history. Or, maybe it's just a cool symbol.

The electronics are very different from the mechanical watches I collect and require a different set of spare parts (not to mention batteries). These watches I suspect will go to someone else to service as I am not prepared (yet) to add more parts and donor movements to my collection at this time. As for being battery operated, I no longer have to wind my watch.


Apologies that the tuning fork is not visible in the photo above. It is hidden below the gold plate you see. While I could have taken the plate off, I'm not about to tinker with these watches right now especially without any spare parts should I inadvertently go oops. The diagram below from the service manual shows the tuning fork though. Not a bad diversion from my focus of collecting and I will likely find another Accutron in my collection one day. Perhaps a 1960s "Spaceview" or a re-issue Spaceview like the one Bulova released in 2010 on the 50th anniversary of the original. 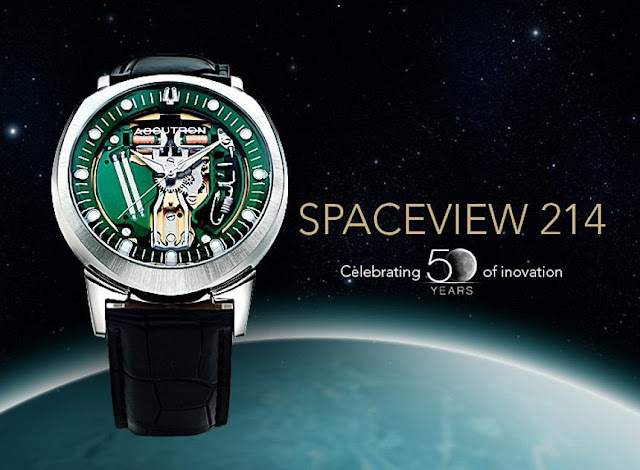 Posted by Inatime Watches at July 29, 2018
Email ThisBlogThis!Share to TwitterShare to FacebookShare to Pinterest